Approaching Taranaki, what sight more beautiful than Mount Egmont’s snowy peak, seen just before the dawn of day, slowly tinged with rosy light – the plain around still lost in gloom-like morning rising from the bed of night?

To be encamped for the night, too, in the forest at its base, the blazing watch-fire fitfully lighting up the surrounding gloom, and disclosing to momentary view the stately stems and leafy canopy of gigantic forest trees; and to awake at early dawn, listening with bated breath in charmed surprise to a chorus of sweet sounds (too sweet almost for earthly melody), would prove a poet’s and a painter’s Paradise!

But health, also, as well as amusement, is gained by a journey in the bush. By change of scene, the dull routine of daily life is broken, and its business and care for the time forgotten. Almost constant mental excitement, gentle in degree, and agreeable in its kind; exposure to the open air, active exercise, and plain and scanty diet, all tend to health. The appetite is sharpened, the nerves are braced, the blood is purified, the cheek is bronzed, and the traveller commonly returns from his journey a stronger and a better man. What wonder that bush-travelling, then, should be a holiday amusement?

But a lengthened expedition into the interior of a new country, cannot of course be undertaken without some preparation. The pleasure which the traveller will derive from his journey, will greatly depend upon the character of his native party. Nor should a stranger, or a novice in bush travelling, ignorant of the language, and unaquainted with the manners of the people, be advised to start alone. On the contrary he should, if possible, secure as a companion some experienced bush traveller.

There being no wayside hostelries, the traveller, if he be not content with the skies for a canopy and the earth for his bed, must snail-like carry his house upon his back; or, which he will probably prefer, must persuade some other person to undertake the labour for him. 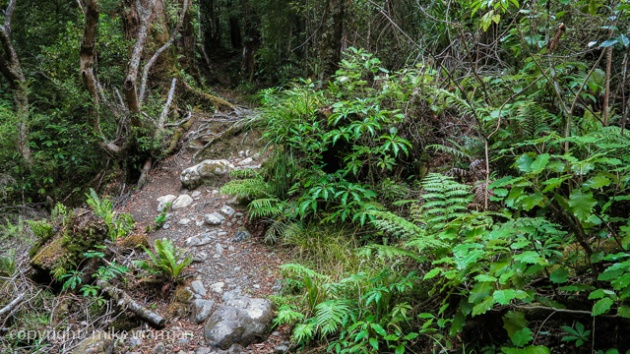 For a traveller who intends to live bush-fashion, three natives, for bearers, are a sufficient complement. On a long journey, when expedition is an object, the weight of each load should not exceed thirty pounds. Tent, bedding, clothes, and food, need not altogether exceed ninety pounds, or thirty pounds each man. This does not allow of bottled beer, wines, &c.; but nothing will surprise a bush traveller more than the indifference with which he will regard these enjoyable home luxuries, after a few days’ free exposure to the open air : itself an all-sufficient stimulant.
‘Auckland, the Capital of New Zealand’, W. Swainson. Smith, Elder & Co. London, 1853.

Note : Auckland was the capital of New Zealand until 1865, when the “Seat of Government” moved to Wellington.
The author, William Swainson (1809-1884), was Attorney General of New Zealand based in Auckland, not the naturalist William John Swainson who died in Wellington in 1855.
Mount Egmont’s name has reverted to the original Taranaki.