An extract from a letter written from Wellington, New Zealand, 24 April 1843, when the settlement was just three years old.

Wellington has been in a state of great excitement for the last few days.
On Wednesday last six convicts who had been sentenced the previous day to ten years’ transportation, broke out of gaol and took possession of a boat lying on the beach. 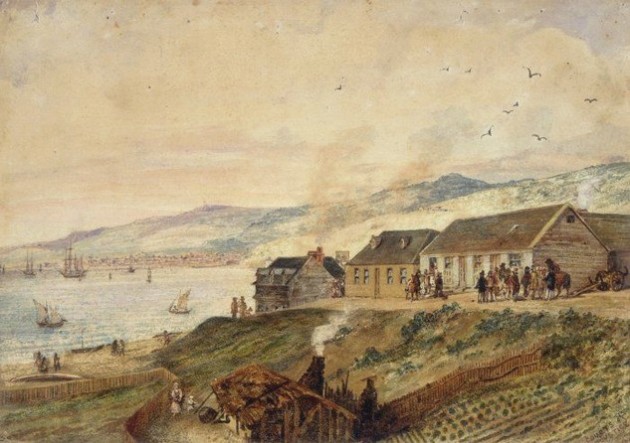 Wellington courthouse on the right c. 1843.

They were half-way across the harbour before anybody went after them. It was blowing a tremendous gale from the N.W., and it soon became dark ; many of the boats returned the same night, but the sheriff [police magistrate] meeting with a small schooner entering the harbour, pressed her in the Queen’s name, and went in pursuit of the prisoners. He returned unsuccessful on Friday morning ; but in the evening everybody was agreeably surprised by the arrival of some Mauris [Maori] in a canoe with the six prisoners.

It appears that the prisoners were wrecked on a reef near Palliser Bay, and got ashore in a most extraordinary manner, each man having from twenty to thirty pounds of irons about his legs. They wandered about the beach in quest of another boat, but they soon fell in with the Mauris, by whom they were captured, and who had been informed of the escape of the convicts by some of the constables. The Mauris behaved well, and will receive £5 for each of the prisoners. It was a daring thing to break out of the gaol in a town where there are 5,000 inhabitants in broad daylight.
‘The New Zealand Journal’, London, 30th September 1843.