I meant to follow my last post about Holyrood Abbey and Palace with some past impressions of Edinburgh and its castle. The fact that a poll of Rough Guide readers has just voted Scotland the most beautiful country in the world is pure coincidence! 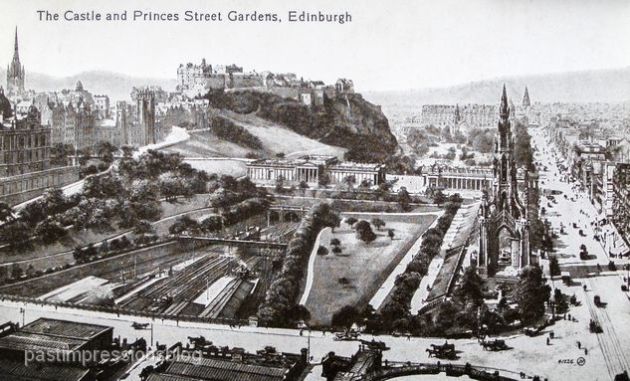 From a postcard by J. Valentine and Co. Image registered 1903.

Edinburgh Castle from the West. J. Valentine and Co. 1913.

J. Valentine and Co. Cameron Highlanders on parade.
“The Castle, which stands at a height of 443 feet above sea level, has an area at the top of about 7 acres”.

J. Valentine and Co. 1913.
“The Forewall Battery was erected in 1336 by Edward III, while St. Margaret’s Chapel dates back a period of over 800 years”.
The caption on this, and the following, card claim the Chapel was built by Queen Margaret, wife of Malcolm Canmore, but it was actually built to her memory by her son, David I, who also founded Holyrood Abbey (see previous post).

There was even more confusion about dates for this giant cannon, Mons Meg. Check today’s official version.
This is another image published by Francis Caird Inglis (1876-1940), although it looks old enough to have been taken by his father Alexander (c.1847-1903)

Photograph by Francis Caird Inglis.
Card caption (abridged): The “Magne Camere,” or Great Hall …. was erected in 1434, and is connected with many events in Scottish history. …. In 1502 James IV had the Hall renovated for the home-coming of his young bride, Margaret Tudor, daughter of Henry VII of England. In 1561, Mary, Queen of Scots, was entertained to a grand banquet on her arrival in Edinburgh. In 1616 James VI of Scotland and I of England celebrated the anniversary of his fifty-third birthday. …. After the Union [with England 1707] the Hall fell into disuse, but was restored by Mr William Nelson, a prominent Edinburgh citizen, and opened to the public in 1892.

Image by Alexander Inglis, father of Francis Caird.
“An interesting sight is the small, well-kept cemetery with its row of miniature gravestones marking the burying-ground of the regimental pets.”

You can check where all of these attractions are with this nifty interactive castle map, and see why Scotland won this year’s Rough Guides poll here.