With the coming of peace [after WW1] the Allied Powers abandoned the use of the propaganda film. Producers found they had enough trouble with the censorship in foreign countries without adding to it by making films which would offend foreigners by open propaganda. All kinds of pitfalls – religious, political and moral – have to be guarded against and a company with an eye to the export market must always be on the look-out for incidents that may lead to wholesale cutting or total banning abroad.

A novelist, for example, may make his villain any nationality he pleases. Not so the film producer. So many foreign countries have taken exception to Hollywood pictures on this ground that most villains are now thoroughly cosmopolitan or else American!

Recent examples of censorship [1930s] illustrate the remarkable diversity of objections that are raised by countries acutely conscious of the influence of films on the minds of audiences.
Poland, for example, cut from Showboat the lines in Ole Man River,
“You an’ me, we sweat and strain,
Body all achin’ an’ racked wid pain,”
on the grounds that they were likely to stir up class enmity.

China banned the British Picture Jack Ahoy because the story of a naval life included a burlesque of Chinese pirates.

Italy cut from Mutiny on the Bounty all laudatory references to Britain, shots of the Union Jack, and the final words: “We’re off for the Mediterranean, lads. We’ll sweep the seas for England!” Germany, apart from banning particular films that offend the Nazi viewpoint, imposes a general veto on all foreign films in which non-Aryans take a part either as producers or actors.
Japan rejected the film The King Steps Out because it tended to ridicule royalty. A number of countries, including Italy, Germany and Poland, banned the film version of the sinking of the U.S. gunboat Panay by the Japanese.

Morality lays many snares for the producer. The film Black Legion was changed at the request of the Hays Office (the unofficial film censors in the United States) so that when a girl character leaves the man whose mistress she has been, she asked him for her hat and bag, not her trunk – the idea being to establish that she had not been living with him ‘but just dropped in for a visit’. 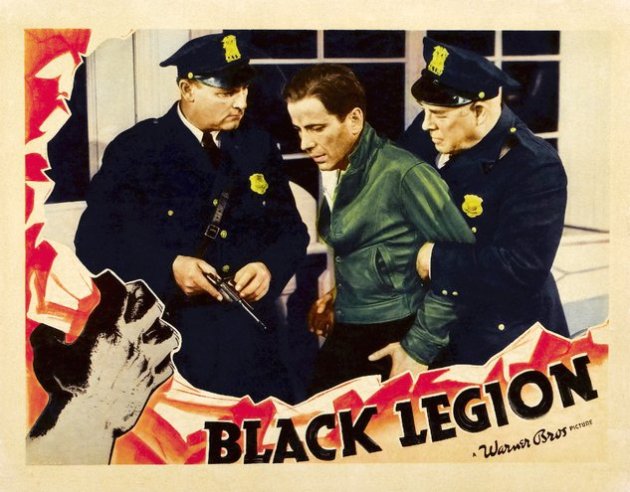 Humphrey Bogart in ‘Black Legion’. Racism, arson and lynching were o.k. but any hint of sex outside marriage was not!

Gilbert Seldes declares [in Movies for the Million] that during the depression the companies in Hollywood “tottered and one by one put themselves into the hands of banking houses”. Then, when they wanted to make a film to expose the munitions racket, it was found the subject could not be handled without giving offence to the bankers. So the project was dropped.

The list might be extended indefinitely with films in which references to sacred subjects, suicides, torture and whipping, bathroom and bedroom scenes, have incurred the wrath of different censors. No matter how innocent and free from controversy a story may appear, a film producer must handle it with kid gloves and walk on eggs until it is completed.
‘Propaganda Boom’. A. J. Mackenzie. The Right Book Club. London. 1938.