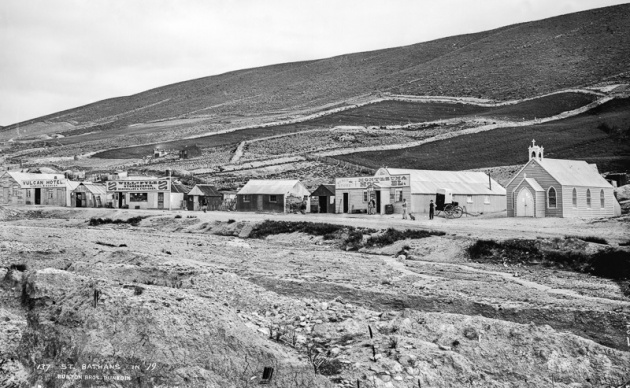 St. Bathans, 1879. Photo by Burton Brothers of Dunedin from the Te Papa collection.

St. Bathans, in the Central Otago district of New Zealand’s South Island, was one of the towns that sprang into life after the discovery of gold there in 1862 and it soon held a population of 2000. By the time this photograph was taken, it seems the “rush” was over. A sign painted beside the window of the Montezuma Hotel advertises a “Horse for Hire”.

On the left of the photograph is the Vulcan Hotel, a typical “tin” accommodation house for travelers in the ’60s and ’70s. It comes from what the English novelist, Anthony Trollope, called the “corrugated iron period” of New Zealand architecture.

Writing about his winter visit to the region in 1872, he observed –
Corrugated iron does not make picturesque houses. It is very portable; very easily shaped; capable of quick construction; and it keeps out the rain. It is, however, subject to drawbacks. The rooms formed of it of course are small, and every word uttered in the house can be heard throughout it, as throughout a shed put up without divisions. And yet the owners and frequenters of these iron domiciles seem never to be aware of the fact. As I lay in bed in one of these metal inns on the road, I was constrained to hear the private conversation of my host and hostess who had retired for the night.

“So this is Mr Anthony Trollope,” said the host. The hostess assented, but I could gather clearly from her voice that she was thinking much more of her back hair than of her visitor.

“Well,” said the host, “he must be a — fool to come travelling in this country in such weather as this.” Perhaps, after all, the host was aware of the peculiarity of his house, and thought it well that I should know his opinion. He could not have spoken any words with which at that moment I should have been more prone to agree.

Several websites will tell you that the Vulcan Hotel was built of mud brick in 1882 and was previously known as the Ballarat, yet here is photographic proof that it was known as the Vulcan before that date. The brick version, now a Category 1 historic building reputed to be haunted, is still in business and attracting tourists and ghost hunters.

The permanent population of St Bathans today is 6 to 10, depending on your source. No figures are available for the number of horses.