The Wanganui up-river tourist trip to Pipiriki, per new river steamboats, discloses leagues of winding waters bounded by the evergreen banks of a bewitching land—a nature’s garden, sprinkled all around by bright patches of green and red, by green lawns and grasses, trees and shrubs; uniform plantations of stately poplars and gums, and irregular clumps of firs.

Then the scene changes as the little steamer clips round some water serpentine into a river reach, bounded by majestic rocks. 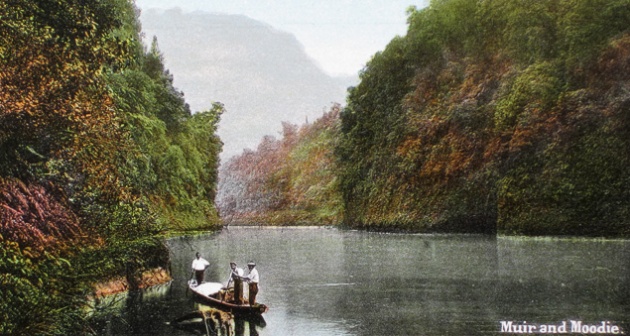 The river becomes very tortuous, through wildest and most beautiful country, till Pipiriki is reached. This settlement, which is full of interest to tourist or traveller, is fifty-nine miles north of Wanganui.
[Cyclopedia of New Zealand, 1897. Abridged.] 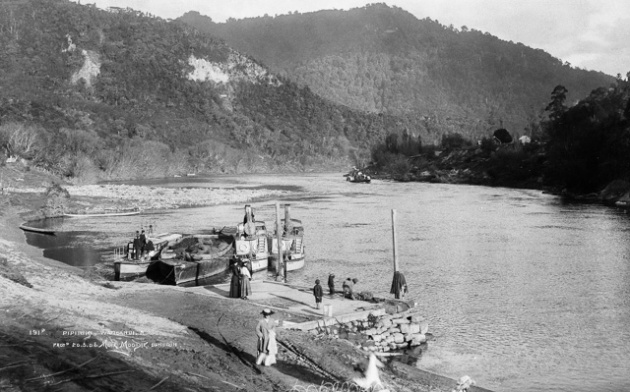 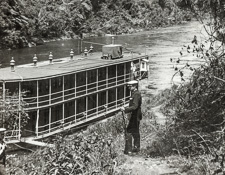 The delightful spot where the Houseboat is moored is near where the Ohura River, one of Wanganui’s largest tributaries, joins the main watercourse by falling in over a ledge.

The Houseboat has a dining saloon, social hall, smoking-room and lounge, and promenade decks, and is fitted with electric light, bathrooms, and lavatories. This floating palace forms an ideal holiday resort, combining the charm of an open-air riverside picnic with the comforts and attention of a first-class hotel. It affords accommodation to travellers up and down the river. On the down journey lunch is here partaken of, and on the up journey, taking two days from Pipiriki to Taumarunui, the night is spent on board. 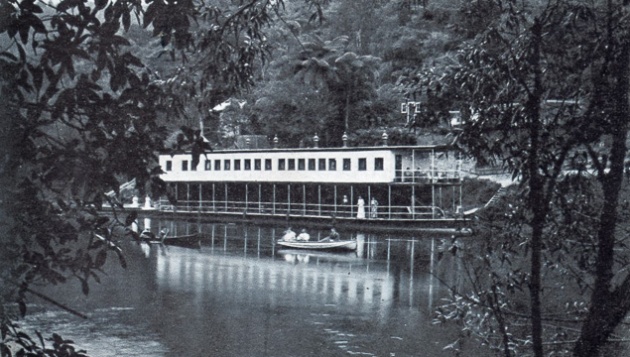 The upper deck contains the dining, social, smoking rooms etc., and the lower deck provides two-berth sleeping accommodation for about sixty persons. The Houseboat is the property of Messrs A. Hatrick and Co., of Wanganui, who control the tourist trade on the river. They also possess a large, modern hotel at Pipiriki, and provide a fleet of eleven steamers, specially built in England for the tourist traffic. The steamers travel from Wanganui to Taumarunui, the terminus of the Main Trunk Railway, connecting in this way with Auckland and Rotorua.
[Caption from a Stereo card of the houseboat by Rose’s Stereoscopic Views, Melbourne, Australia. c.1909. Abridged.] 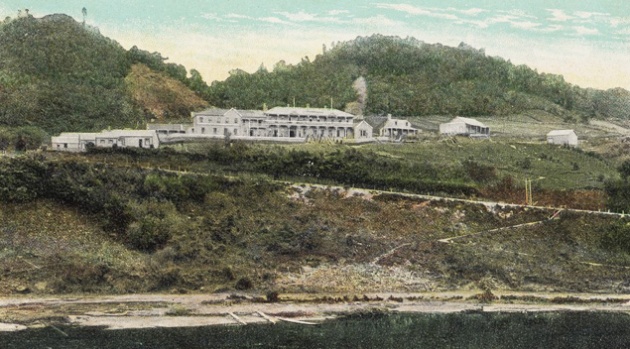 Alexander Hatrick, who promoted the river internationally as the “Rhine of New Zealand” even though the two have little in common, bought Pipiriki House in 1901 and doubled its size. It burned down in 1910. 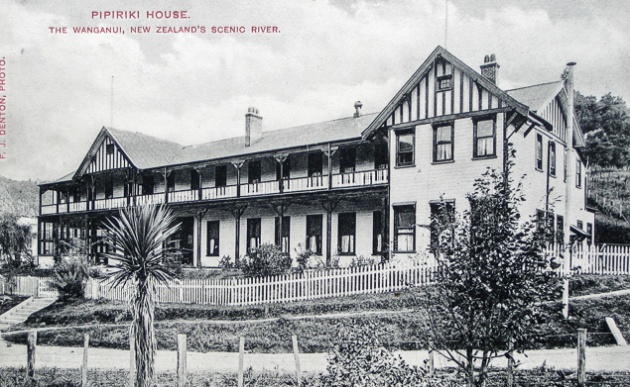 Undaunted, Hatrick replaced his hotel with this one which lasted until 1959, when it also burned to the ground. It wasn’t rebuilt. 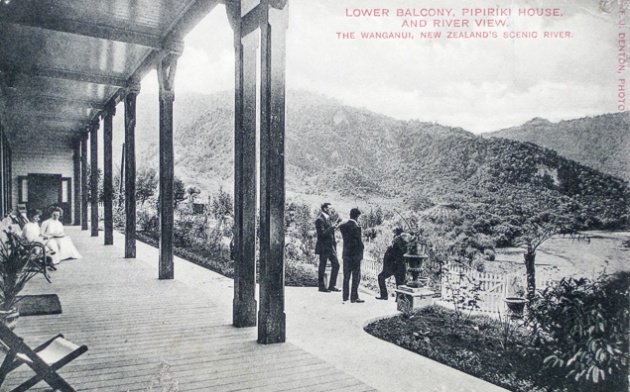 The view from the new Pipiriki House after 1910. 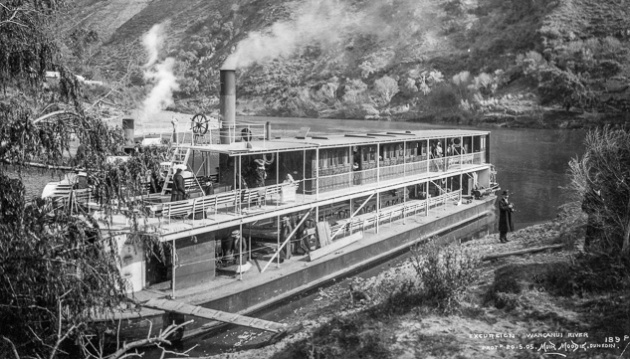 The stern wheel paddle steamer Manuwai was Hatrick’s biggest river boat, pictured here on an excursion in the Wanganui’s lower reaches in 1905. The upstream section from Pipiriki to Taumarunui required smaller boats that could handle being winched over some of the rapids.

If you want to relive the old days on the Whanganui river, you can take a summer cruise in the restored paddle steamer Waimarie, built in 1899. The season starts October 20.

Image sources: counting down from the top – 2, 3, 5 and 8 are from the Te Papa collection, the rest are from mine. 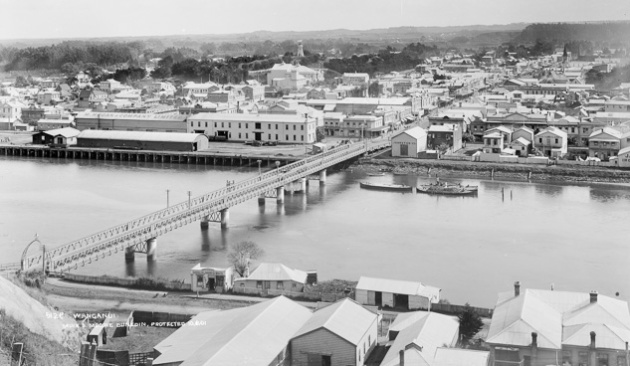 The Wanganui of 1897 is a charming spot, desirable alike as a place of residence or as a health resort. The old settlers, who bore the burden and heat of the day during the anxious days when houses were first robbed and then fired, farms wrecked and lives sacrificed, have mostly passed away. Little is known by the present generation of the hardships endured by the pioneers, who braved the dangers and endured the privations which fell to their lot, and thus paved the way for the advantages of these later times.

Situated in latitude 39°57″ south and in longitude 175°5″ east, and being distant from Wellington 151 miles by rail and 102 miles by sea, the borough is on the right (or north) bank of the Wanganui River. 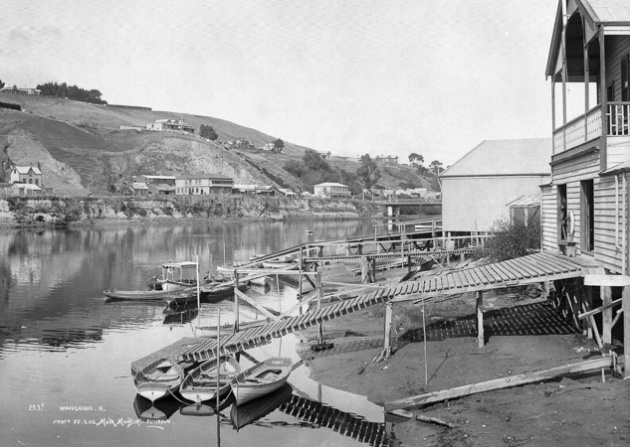 Looking down river from the north bank.

The population of Wanganui, as disclosed by the census of 1896, was 5936. This would, however, be much increased by including the suburbs, not forgetting those on the south bank of the river, with which the borough is connected with a splendid iron bridge, 600 feet long, supported on seven cast-iron cylindrical piers, and constructed at a cost of £32,000. 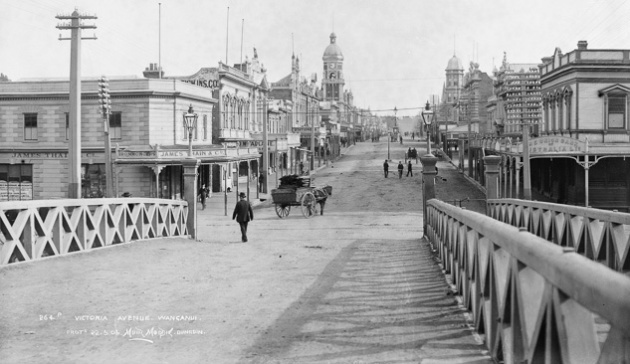 Victoria Avenue at the north end of the bridge.

Wanganui is about four miles from the Heads, the river being navigable for vessels of light draught for fifty-nine miles, to Pipiriki, with which there is a regular steam-service.

An important station on the Wellington and Napier to New Plymouth railway lines, there is regular communication with all parts of the North Island inland, in addition to the steamer traffic by the West Coast. 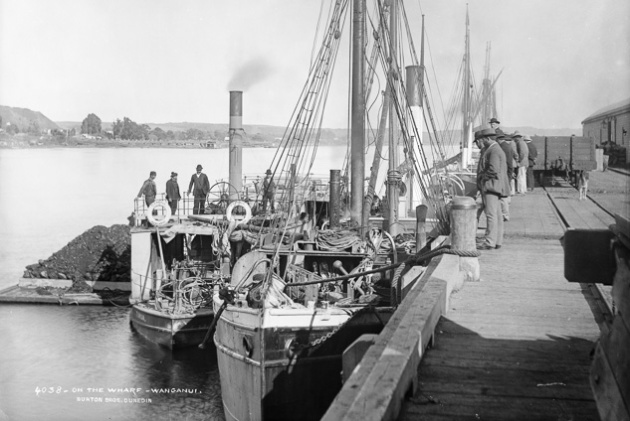 A slow day at the town wharf.

Referring to this sunny spot, a writer in the Otago Witness says:—“Suddenly sweeping round a bend of the hillside road you have been shooting down for the last ten minutes, lovely Wanganui and its stately river, spanned by the cylinder bridge, and all the spires and homes among the plantations, come into view; and after the visitor has admired the natural charms of the place his next impression is a firm conviction that Wanganui has all the elements of a vigorous, prosperous, and contented town”.
Cyclopedia of New Zealand, 1897. 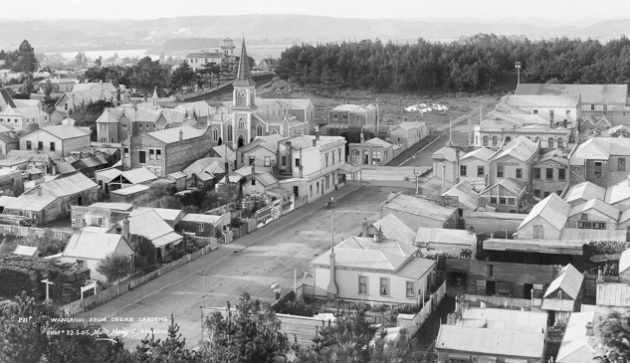 Part of the town seen from Cooks Gardens, with a good breeze blowing to dry the washing in the back paddock.

The photographs, all from the Te Papa collection, were made between 1901 and 1906.

Wanganui is now, officially, Whanganui.
Check the location with this North Island map at Lonely Planet.